Looking for how to get a free airline ticket? My husband and I do this, and I'll show you how, plus share a frequent flyer program chart. 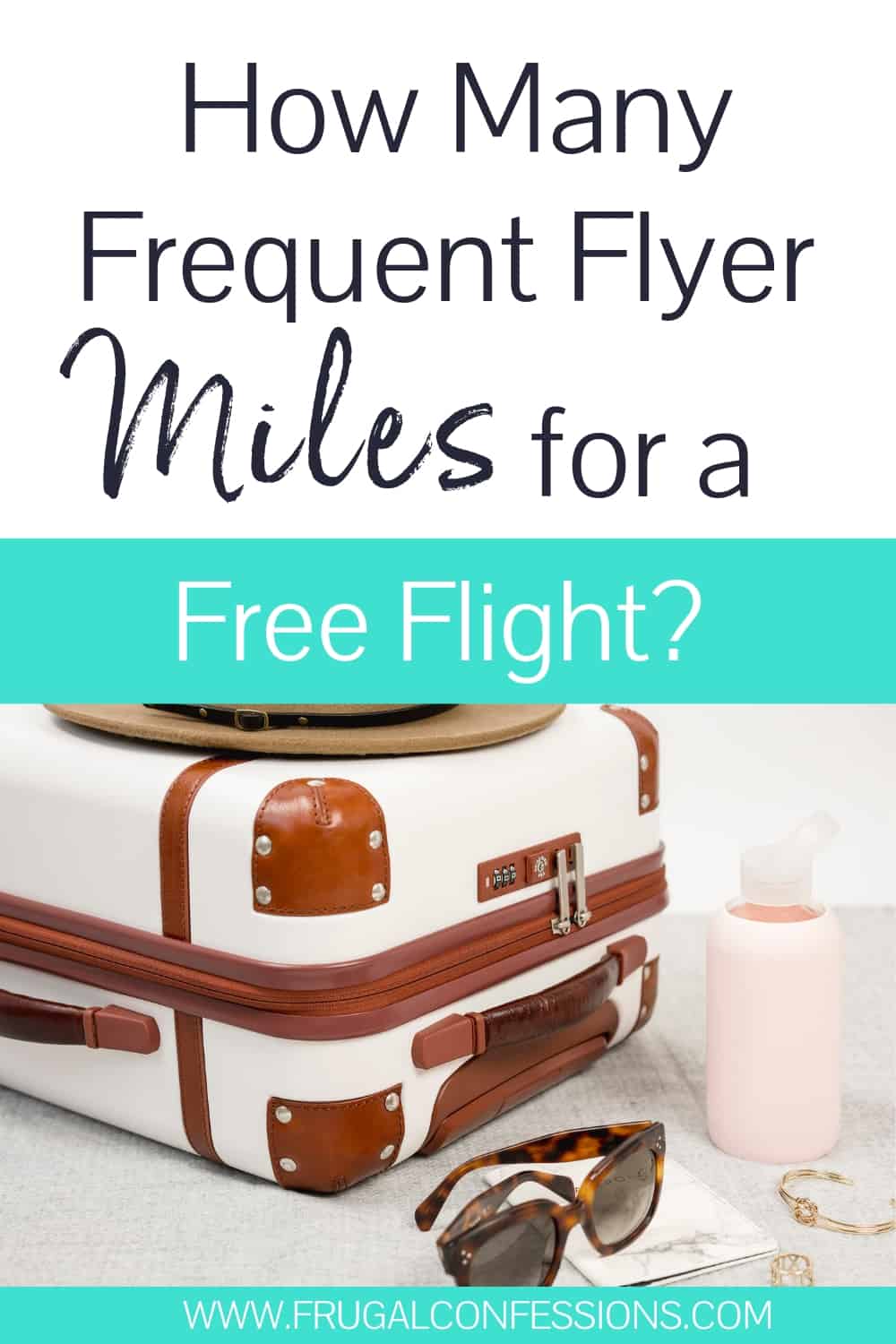 My husband and I did something incredible last Thanksgiving with our frequent flyer miles (or at least incredible to us): we scored free airfare to Michigan at an 85% discount over the holidays. Our family gathering was really nice, and even more so because we were able to get around Michigan’s very expensive airline market.

For us to fly there and back from Houston would have cost an astounding $1400. To give you a bit of perspective, you can almost fly two people to Dublin and back for that same price.

How to save money when we're paying those kinds of prices?

Let's look at how many frequent flyer miles you need for a free ticket, PLUS, my 3 strategies for how to score free airline tickets without racking up the miles all by yourself.

How Many Frequent Flyer Miles Do You Need for a Free Airline Ticket?

Note: Frequent flyer mile programs are sometimes tedious and difficult to compare. Feel free to share in the comments anything that should be added to the chart.

How to Get Free Flight Tickets? 3 More Ways

Sooo…what if you're really far away from a free ticket through frequent flyer miles? I've got 3 different strategies for how you can hack your way to a free flight, anyway.

Two years ago, we were given two $75 vouchers after a several-hour flight delay. This was after calling Southwest from the airport (hey, we had several hours to wait, so I thought I would give it a try) and telling them about the meeting I was now going to miss because of this delay.

I thought I was doing pretty well for myself.

Turns out, I might’ve been entitled to a lot more.

How long does a flight have to be delayed for compensation? The US Department of Transportation (DOT) mandates compensation after an hour’s delay on a domestic flight, or between a one-hour and four-hour delay on international flight.

I've traveled a good bit in my day, and can tell you that I don't remember receiving compensation that one Christmas Eve my husband Paul and I spent six hours playing cards to kill time in an airport pub, or the time my flight from London to Boston was so late getting in that I had to spend the night because I missed my connecting flight to Philadelphia (they did put me up in a hotel room, but only after a substantial midnight stand down between ten of us in the same boat, er, airline lobby and an airline representative).

This may come as a surprise to you (it sure as heck does to me), but there are no-shows on almost every flight. They happen so regularly that airlines try to estimate how many no-shows they are going to have so that they can double book those seats and make more money.

The only problem? If everyone ends up showing up anyway, then someone or several someones are going to get bumped either voluntarily or involuntarily to a different flight.

They then tempt volunteers with promises of a travel voucher (by the way, this is a great strategy some use to score free flights if you have the time). If they can’t get a volunteer(s), then they have to involuntarily bump someone. Vouchers will expire after a year, so accept a check payment.

Bumped passengers are entitled to cash compensation equal to the value of four times their ticket price, up to a maximum of $1,300 if delayed for a lengthy period of time (defined as between over two hours from scheduled arrival time for domestic flights and over four hours for international flights), and up to double their ticket price, maximum of $650, for short delays (defined as within one to two hours of scheduled arrival time).

I had a bag chewed up by the luggage conveyor belt once, so I was given a brand new London Fog one.

Turns out that if your bag is one of the 2 million lost domestically each year for any period of time, then your checked bag fee needs to be reimbursed (sounds like the least they could do). And if your bag is one of the lucky ones to be forever lost, then the US DOT mandates up to $3,300 per customer in reimbursement. Though the settlement factors in depreciation and you may have to show receipts for the lost items.

Travelers Who Want Reimbursed But Don't Want to Fool with It

So after all of this information, you might not be motivated enough to go after what is owed to you. I mean, we're all busy, right?

If you experience a delay or a missed connection, or anything else of the like, then GetAirHelp will go after funds you are owed on your behalf. Their fee for doing the legwork is 25% of any money they score for you. It only takes three minutes to check, and what's even better, they can check on past flights for you and possibly receive compensation for those! If it comes to it, they'll even take the airline to court on your behalf. And if they receive no compensation for you, then you pay nothing.

Before researching for this article, I honestly thought airlines who gave out vouchers for some of these mishaps were doing it out of the goodness of their hearts (or at least to score some points with social-media happy passengers). Turns out, it's the law.

You've probably heard about people scoring a free flight doing something called Travel Hacking. This is when they open up a credit card with an awesome bonus offer of free airfare or frequent flyer miles if they spend a certain amount of money in a certain amount of time.

In a nutshell, anyway.

But what if you don't want to open up a new credit card just to reap a free flight?

Well, as a young adult who was very into international travel (but had very little money), I kinda stumbled onto a different way to score free airfare.

With a little bit of forethought and luck, you can get in on this secret trick as well.

I know, I know. That sounds vague.

So let me explain.

There are businesses, organizations, clubs, groups, etc. that have the funds to pay for your spring break travel.

But why would they want to?

Well, you have to pitch them a really good reason.

Two very good reasons I've come up with in the past:

Let's tackle both, with examples from my own experience.

Spring Break in Japan: $500 from a Company for Market Research

Remember I said “with a little forethought and luck”? Well, the luck with this one came from being an intern for a snack food start-up company.

After that, there was a lot of forethought.

You see, I was dating my now-husband, who happened to be stationed in Japan. And I desperately wanted to go visit him for Spring Break. The only problem? Airfare was an excruciating $800-1,200, which is a huge amount to cover on a $5.15 federal work-study job.

So, I decided to pitch a market research project to the company.

Here's a quick rundown of the pitch:

Not only did this work, but I was featured in the local newspaper when I gave them the presentation.

Your Turn: What organization, group, company, etc. do you have an association or contact with that could use some work-on-the-ground in a foreign country? Think outside of the box here. Maybe even base your location solely upon their needs (hey, beats hanging around home instead, right?).

Spring Break in Paris: $628.45 from My College Department Head

I was chosen to be part of the Model UN team our college sent to Geneva, Switzerland. As if that wasn't cool enough, the trip happened to be the week leading up to Spring Break. So what did I do (after a little thought)?

I asked if we could have the return ticket for any date that we wanted.

The department head had no problem with that. So I made my return ticket for a week after the conference ended, and took a train from Geneva to Paris to spend a week there for Spring Break. It was a free flight to Geneva, then just cost me $80-$100 (estimated – I did not save that ticket) to get to Paris.

Your Turn: This one doesn't have to be only for Spring Break. On any educational trip abroad take several days off in order to tack on some extra travel time for a leisure trip. Okay the return ticket date change with whoever is sponsoring the educational trip. If there is going to be a difference in cost from when you were originally going to return home (at the end of the educational part), then offer to pay the difference (which is a heck of a lot cheaper than paying the full round trip).

The point to this article is to show you that with a bit of thinking outside of the box, luck, and forethought, you can get your Spring Break airfare paid for. I mean, what do you have to lose?

When my uncle and aunt decided to host Thanksgiving at their home last year and I learned that nearly everyone would be joining in on the festivities, I knew that we wanted to go.

How We Scored Airfare at an 85% Discount

Instead of saying “no” to what we wanted, I decided to look for (much) cheaper alternatives. Southwest Airlines had previously sent us several offers for two roundtrip tickets by opening up a credit card with them, paying the $99 annual fee, and making one purchase.

I took them up on their offer several months in advance in order to receive the frequent flyer miles in time (Southwest is running a similar deal now, though you have to make $1,000 in purchases in the first three months for the tickets. Note: this is not an affiliate link).

Even with this strategy, the free roundtrip ticket offer only covered $800. So on top of this we liquidated all of Paul’s frequent flyer miles he had accumulated last year from traveling for business. Problem solved! We ended up paying $20 in security fees, plus the $99 in annual fees for the credit card.

Which frequent flyer program(s) work best for you?

I found your blog and have a question if you have a second. I am patiently waiting for SWA to open up Thanksgiving 2016. My son's band is performing at the Macy's parade and we are trying to use our points to travel. We have accumulated 33k points and wondering if that is going to be enough for the trip or if they charge double or something crazy for that week. We need to travel Sun Nov 20-Fri Nov 25. I think we should have enough for when they release the dates in May (although I will check often just in case) I was wondering how many you used last year when you traveled or if you remember? Thanks!

I just purchased a round trip ticket from Houston to San Francisco, using my United mileage awards. I had about 31,000 miles from business trips (former employer). My ticket cost only $7.50!! The full fare (economy) is about $466.

Marsha that is so great! What a wonderful feeling. Enjoy your trip;).