Getting Seasonal jobs in Alaska are an excellent way of living in one of the most majestic places on earth. Let's look at how you can get a seasonal job in 2019, and afford to live in Alaska. 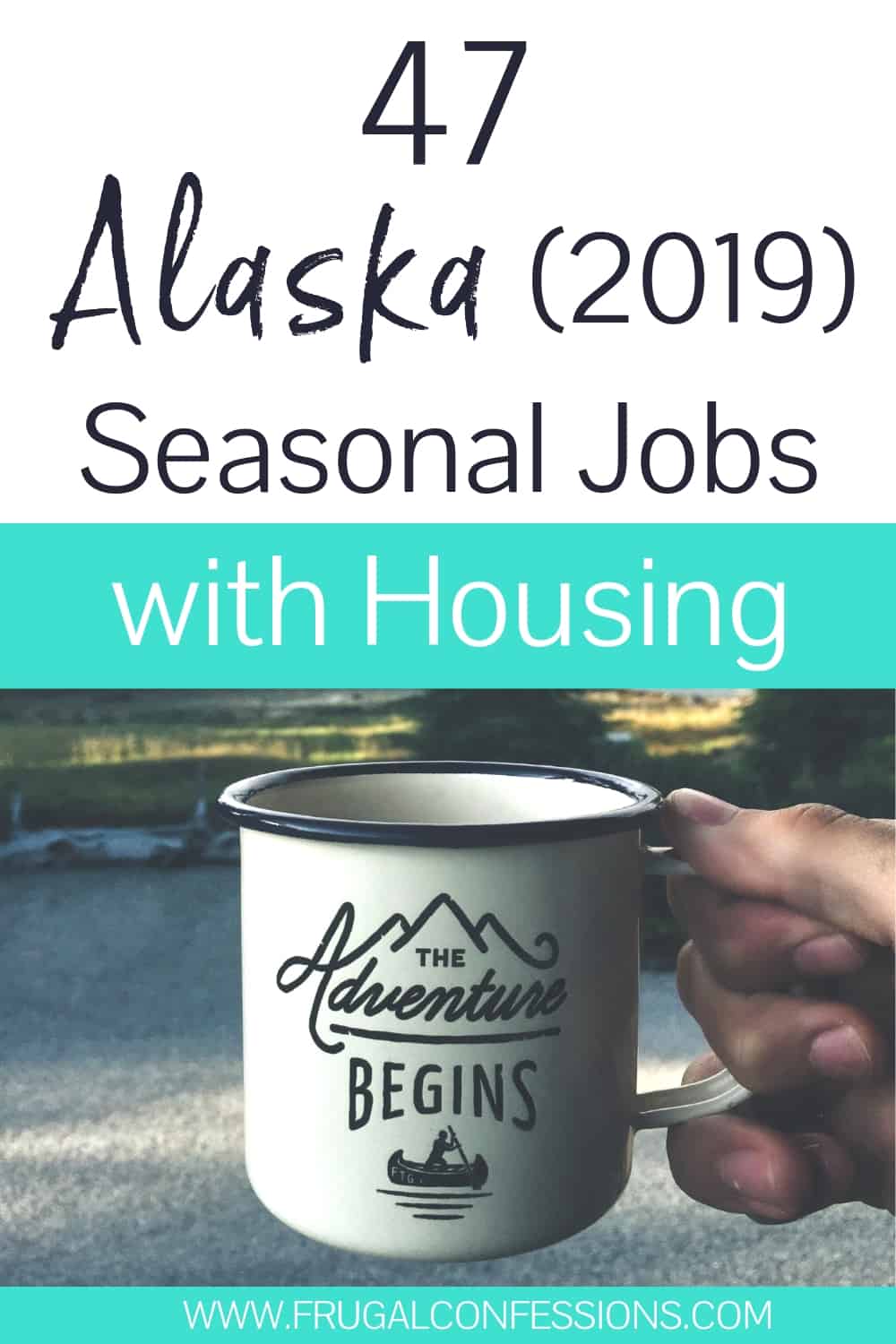 , we met Ira, a retired-lawyer-turned-tour-guide.

Ira stumbled upon his seasonal Alaska job probably how it often happens: as a newly retiree he traveled to Alaska and just fell in love with its beauty and majesty. He wanted to find a way to spend several months a year in Alaska, and so at the age of 64 he reinvented himself by becoming a seasonal worker.

You can bet I asked more questions (after our tour spiel was over, of course).

May through September he and his wife have an apartment in Anchorage (5 months of the year). There is also employee housing/dorms/hotels for “stayovers” while he's away from his apartment fulfilling his tour duties.

And what qualified him to become a tour guide? There was a 1-week orientation, he studied a lot about the history and culture of Alaska in a local Alaskan library, and he “prepared index cards to have something to say to tourists.”

Needless to say, he's in love with his part-time retirement gig!

Even though it's been several years, I'm still pretty fascinated with this idea for lifestyle design.

Who else out there is living their Alaska dreams through seasonal work, and is it actually a viable option?

Who else out there is living their Alaska dreams through seasonal work, and is it actually a viable option? Click To Tweet

Fortunately I found two willing interviewees to tell me about their own experiences plus share any insights into the lifestyle: Lindsay from NotoriousDebt.com and Fritz from The Retirement Manifesto.

But first, I want to share some season jobs in Alaska that can help with your job search.

The following are Alaska summer jobs that are hiring right now (April – May):

The following are some really great Alaska summer jobs with housing if you're an artist who wants to work on your career in peace (and in magnificent nature!):

Looking for adventurous Alaska seasonal work? Check out the following:

What Can Seasonal Work Opportunities in Alaska Look Like?

Do a quick Google Swagbucks search for seasonal work in Alaska, and you'll find lots of Discovery-Channel-Worthy jobs, such as Fishing Boat Deckhand, and Fish & Wildlife Technician II. Of course you'll find some not-so-glamorous ones, such as Seasonal Cemetery Assistant and Class B CDL Shuttle Bus Driver.

Psst: What else is lurking on that search results page? An Alaskan government-sponsored article warning against peachy-sounding seasonal work jobs.

I've spoken with three people now who have designed their lives one way or another through seasonal work in Alaska.

Aside from Ira's example above of being a seasonal tourist guide on the Mt. McKinley Explorer, there's Lindsay who worked as a dog handler, at a botanical gardens, and at a tourist attraction, her friend who currently works as a glacier dog mushing guide in Juneau, and Fritz, who worked in Glacier Bay from early June – early Sept between his Junior and Senior years of college (1984).

Here are some details about the types of jobs these guys held:

So, not a terrible amount of money was being made by these guys. That could be okay…except isn't Alaska crazy expensive to live in?

What Does it Cost to Live in Alaska?

Bankrate's got a really neat cost-of-living comparison calculator where you can check out how much more it would cost for you to live in a specific Alaskan city versus where you live now.

But be prepared to be price-shocked. I put in our salary, our current city of Houston, then chose to move us to Anchorage to reveal that we would need to make roughly 34% more income to sustain our current standard of living.

Alaska is certainly not a cheap place to live, especially if you want to live in remote locations. Even living in Anchorage, the most populated city, you're facing the fifth highest cost of living in the U.S.

Sure, a teeny part of this can be offset by the Permanent Fund Dividends that approximately 643,000 Alaskans receive each year (see here if you could qualify − this would obviously only be for seasonal workers who also live in Alaska year-round). But the amount you can receive varies each year depending partly on the supply and demand of oil. For example, in 2015 residents could count on $2,072 per family member, but in 2016 that number only came to $1,022.

So how can seasonal workers like Ira, Lindsay, Fritz, and others afford to live?

Here's a few answers they shared:

All of this raises an important question: would you be willing to take a decent decrease in standard of living in order to live out the Alaskan dream?

Can You Sustain Yourself by Working a Few Months a Year?

I think my final question I had going into this article is whether or not you can work seasonally in Alaska and then live in Alaska off of what you earned for the rest of the year.

Is it a viable lifestyle design model?

Lindsay says, “I think working seasonally in a tourism job would only be viable if someone already had a hefty chunk of money in savings to live off of. It's not really sustainable if you're just living off of the earnings from one seasonal job. Even if you've got a well-paid job (like a tour leader at a high-revenue operation), you'll probably only earn $20,000 in a tourist season, and most people earn $10,000 or less. With the high cost of living up there, that's not sustainable – that'll get you to about December.”

In Lindsay's case, her heating bill came to around $3,000-$4,000 per year. “Gas was also expensive, and the irony was never lost on my because we lived about 1/4 of a mile away from the Trans-Alaska pipeline. I can't remember the specific details of a lot of it because I wasn't financially-minded back then, and it seemed normal enough for me since I'd spent my entire adult life there. To visit any friends/family we'd have to shell out about $1,000 each for a plane ticket, so we didn't leave very often…”

And while you could get a lot of meat for free by hunting, “by the time you pay for the gun, the license, enough ammo to be good at shooting and all the other accoutrements, it came out to be very expensive. It was also almost impossible to grow anything other than lettuce, potatoes, broccoli, and carrots there.”

She cites auto repairs from the cold, heavy-duty winter, extension cords for your car, and snow tires as other expenses that will quickly eat into your cash stash.

As far as a retirement plan?

Fritz says, “We have talked to some retired seasonal workers while we've been on vacation in Alaska, but most seem to return to the Lower 48 for the winters.” While Lindsay adds, “…Of course, there are retired people in Alaska year-round. You just either have to have enough money saved already, work a full-time year-round job, or be willing to live in a very cold shack for the rest of your life. :)… Alaska is a fantastic place, but working one seasonal job is not enough to sustain you year-round. It's totally possible to work in Alaska seasonally – a lot of people do it, but you'll need to have a supplementary plan of some sort and/or be willing to live like a pauper.”

This seems to be the case with Ira and his wife as well, who only stay in Alaska from May until September.

Everyone I've spoken with for this article agree that Alaska is a very worthy place to live. As long as you've got a solid financial plan, and are willing to cut out what others might consider luxuries (heck, even basic necessities in some cases).

In fact, Fritz − who wants me to tell all of you to “seek adventure! Life's too short to not enjoy the journey − is considering this type of model as his early retirement plan. He'll be retiring at 55, which is early next summer. He says, “We expect our retirement will be a combination of long, slow RV travel, mixed in with periods of seasonal work, and 6-month stays “back home” in our cabin in the North Georgia mountains.”

So what do you think? Would you ever consider this as part of your lifestyle design model? Do you know of anyone who currently is doing this? I'd love to hear more about experiences below.

wow i do not think i would survive out there in Alaska. The heating bill was 3 - 4k? 1k per plane ticket. Yea i think i will visit alaska and not live there. Lol Thanks for sharing. Amanda.

Haha--it's not for everyone, that's for sure! Super interesting to read about though, and I had a lot of fun learning about people who do it.