What does an Amish teenager's life look like? Let's dive into some Amish teenage financial responsibilities, plus how their parents help them manage money.

As some of you may know, my father is a full-time Amish taxi driver in Lancaster County, PA*.

One of my father’s main employers is a man named Leroy. Leroy owns a construction company and hires my father to drive him around to his in-state and out-of-state construction sites once a week to check up on his crews. 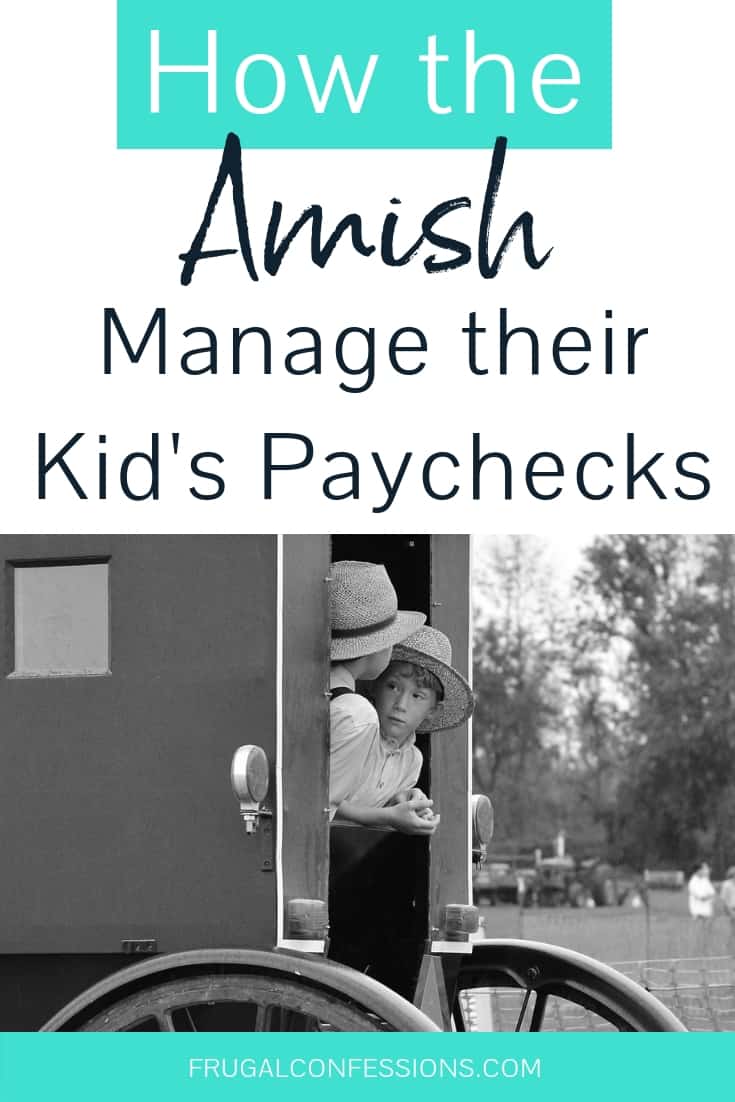 Over the course of six hours we traveled on dirt roads and highways, through Amish country and into commercial zones, and also shared a lunch together at a diner my father and Leroy both enjoy.

I learned some awesome Amish money saving tips, not to mention, got a glimpse into Amish teenage life.

I also got the chance to entertain some rumors about working Amish kids and Amish teenagers I had heard many years ago, as well as further debunk Discovery Channel’s Amish Mafia show (does anyone really think that show is real?).

How Do Amish Make Money — What Do Amish Kids Do When they Want to Get a Job?

I had heard many years ago that when an Amish teenager gets a job outside of the home, they must give their paycheck to their parents.

Their parents then give them 25% to spend and save the rest for their future. Once the child is married or “comes of age”, the parents hand over a nice, fat bank account to help the new couple begin their lives together. Not a bad idea, right?

Since Leroy has five children aged 3 to 21 of his own, I focused on learning about whether or not some variation of this story was true. My goal was to get the whole story about how the Amish deal with their children’s finances once they begin to earn money outside of the home.

Leroy confirmed that in the Amish school system, kids generally go to school until the 8th grade, at which point they graduate and apprentice with someone or otherwise find employment.

Both the boys and the girls find employment, but Leroy said that the Amish boys generally have more opportunity to do so.

Leroy also said that some Amish kids find employment with “Englishmen”, but only ones that their parents trust and know.

I took this opportunity to jab at my father, because earlier in the car ride he was asking Leroy if his son wanted to mow his lawn for the summer again for some extra cash.

I guess my father is a trustworthy “Englishman”!

Some Amish kids find employment with 'Englishmen', but only ones that their parents trust & know. Click To Tweet

There is no allowance given to children. Leroy mentioned that they do give their kids spending money if for special occasions, but no money is given to them on a regular basis.

I've seen the question “can a parent take a child's paycheck” being asked online, and with the Amish, this is common practice.

CAN the Amish take their kid's paychecks? Not sure, legally. But DO they? Yes.

I asked Leroy whether or not the 25% spending rule was true.

I chuckled back at him, thinking he was joking with me.

Turns out, he was being completely serious.

In Leroy’s family, his eldest son works at a market on Saturdays earning $120 and then works on one of Leroy’s crews four days per week. He is allowed to keep 10% of his money for spending purposes. The rest goes to Leroy, who invests 10% of it for his son’s future, and puts the remainder towards the household. Each year the amount Leroy invests towards his son’s future increases by 10% (10% the first year of work, 20% the second year, etc.).

The same percentages apply to both Amish boys and Amish girls.

I wanted to know if this was a common practice among the Amish, or just in this particular man’s household.

Leroy confirmed that 10% is a normal amount given to children from their paychecks for spending, but that the “more liberal” Amish will allow their kids to spend up to 50% of their paychecks.

Part of the Percentage that Goes to the Household is Returned

Making your child contribute 80% of their income towards the household may sound harsh.

At least that is what I thought, so I asked some follow-up questions.

It turns out that parents give their Amish kids a used buggy and a horse when they are first learning how to drive, and then Leroy will purchase a brand new buggy for his son between the ages of 17-19. The purchase price for a brand new buggy? Leroy estimates the current cost is between $9,000 and $10,000, and that is without the horse (I’ve never even spent that much on a vehicle, which has the power of a team of horses!).

I was very curious to learn about whether or not Leroy played the stock market, or if he used a broker for his investments.

It turns out that the Amish have a system set up within their community called Amish Helping Hands.

Money is invested through this group in the form of low-interest loans (currently 3.25% for mortgages and 3.50% for farmers, which my father pointed out could be found on the open market right now as well) to Amish farmers and first-time homeowners. Interest is paid on investments twice a year or reinvested, and the expense ratio is 0.25%.

How the Money Will be Used — When the Amish Marry

Leroy estimates that his son will purchase his first home between 18 and 19 years of age.

My father and I were very impressed with this.

I asked Leroy if it was normal for Amish teen boys to purchase their first home at the tender age of 18, and Leroy chuckled. He said “no, that’s a little young”, and then proceeded to set the record straight: it typically occurs at 21. My father and I stole a glance at each other at this point; boy is that young!

This house for his son will be a rental property, and he will continue to live at home until he is married. At the age of 21, he no longer owes any money towards the household and will live rent-free until marrying and moving out on his own.

This was a fascinating and eye-opening conversation with Leroy, and I am very thankful to my father for inviting me along. Our conversation left me wondering how the early adult lives of “Englishmen” children might change if their parents had divvied up each of their after-school and weekend paychecks between investments, savings, and household expenditures. Wouldn’t it be nice to have a large amount of money set aside for college, a down payment, first/last month’s rent, etc.? Then again, do you think teenagers would be willing to hand over their paychecks to their parents? Or do you think “English” parents would be wise in their dealings with their children’s money?

All things considered, I guess it depends on each individual, their household, and the parents involved. What do you think about this system?

* The Amish are generally not allowed to own or operate a vehicle, but they are allowed to hire an “Englishman” (that’s what they call the rest of us) to drive them for business, social visits, errands, etc. My father has made a great living from this, and I also found the profession quite lucrative over summer breaks and weekends during college semesters.

This is so interesting, thanks for the detailed post! I think the Amish are fascinating! They do so many things right, IMO. I wasn't clear on the details of their money management practices, but you are knocking it out!

One of my friend in college had scholarships and her parents provided everything for her (very basic, but enough food and a room) and kept the scholarships so she had a nice windfall after five years of college. That idea of keeping most of the child's income is very smart to help them get started. Getting a house for them is also a great idea. I can imagine the Amish are big savers since there isn't much to spend on. They do buy quality items, like the buggy or tools for the garden but if you get the community to help you build your house, and then grow your food and make your clothes, most of what you make can go to savings.

If you lead your children to a responsible management of their money, they will grow up learning it's importance and value. The earlier they are aware, the better.

The apprenticeship system sounds quite interesting. I wonder what the financial implications of this specifically are.

I think their apprenticeship system would be a great topic for my next Amish article! I really don't know much about how it works, aside from some vague details. Thanks for your thoughts!

I wish that I had had more guidance like this with $$ as I was growing up. Even a little of this sort of thinking would have helped a lot. I am feeling about a decade behind when it comes to finances. Hope this article is widely read and its contents applied. Well done!

I think it's pretty wise the way that they handle their children's money. At first it sounded a little harsh, but as the conversation went on, I realized that it was pretty awesome.